Out of print but a new edition is coming soon.

For teaching materials for this novel, please send an email to authorhouston24@gmail.com 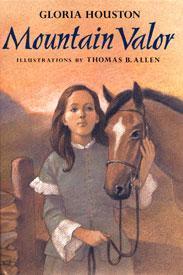 From Publishers Weekly
Based on a true story embellished by folklore, this account of a North Carolina mountain girl's courage paints a realistic, stark picture of the Civil War while preserving the flavor and customs of long-ago Appalachia. While her father, brothers and uncle are off fighting opposite sides of the war, 11-year-old Valor, her mother, a young cousin and two faithful servants are left to run the farm. Two vicious raids by Yankee soldiers leave the family ravaged and without livestock. Vowing revenge, Valor sets out to retrieve the animals and murder the red-bearded soldier who was especially villainous. Disguised as a boy and armed with two of her father's guns, Valor undertakes a dangerous journey to the enemy campsite, along the way experiencing a frightening encounter with a grizzly bear. At the campsite, the young heroine nearly accomplishes her mission, drugging the soldiers and rounding up the livestock, but when the opportunity comes to kill her sworn enemy, Valor cannot bring herself to take a life. Houston ( Littlejim ; My Great - Aunt Arizona ), who grew up in the Appalachian mountains, offers a profound definition of bravery in this engrossing adventure story. Her evocative prose expresses the terror, determination and stoicism of women and children left on the home front. Ages 8-up.
Copyright 1994 Reed Business Information, Inc.


From School Library Journal
Grade 5-8-Valor, a young girl in the North Carolina Appalachians during the Civil War, struggles to live up to her name as the war drags on and her family's farm is raided by marauders . . . the strength of women in spite of their societal limitations.. . . Houston has moments of eloquence when describing the beauty of the mountains or the aching pain of separation caused by war. . . . She conveys the girl's anger, fear, and frustration. . . .When the raiders return near the end of the war, brutalizing the family and taking their livestock, Valor disguises herself as a boy to avenge her family and retrieve their property. As with Houston's Littlejim (Philomel, 1990), set in the Appalachians of the early 1900s, Mountain Valor is based on a true story from the author's family history.