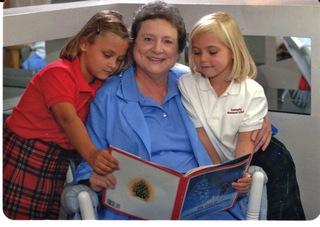 Dr. Gloria Houston is internationally known as an educator and an author of multi-award winning, best selling books for young readers, as well as a writer of textbooks and other teaching materials. However, she typifies herself as “first, last and always, a teacher.”

With a Bachelor’s Degree from Appalachian State University, Boone, NC, and following years of work in public and private schools in grades k-12 in North Carolina, Louisiana, Texas and Florida, she was awarded a Master’s Degree and Ph. D. in interdisciplinary studies by the University of South Florida, Tampa. At USF, she held an appointed Author-in-Residence position. There, she was the founding coordinator of Suncoast Young Authors Conference, one of more than fifty young writers conferences she has implemented nationally. She also founded the USF Young Writers Camp and the USF Center for the Study of Child Writing.

She is designated as a Distinguished Educator by the International Reading Association, an honor that included two invited chapters in Distinguished Educators on Reading: Contributions that Have Shaped Effective Literacy Education, published once each decade. She won the National Excellence in Literacy Education award for her writing curriculum “Tell Me a Story” for IBM Educational Systems and was appointed to write the support paper for their “Writing to Write” program, distributed internationally, which involved examining all the research data in writing pedagogy to that time. She was spokesperson for IBM Educational Systems for the media and at educational conferences internationally.

Appalachian State has named her a Distinguished Alumni and a member of the Rhododendron Society, for her contributions to education. In 2005, she was selected as keynote speaker for the dedication of the new ASU Belk Library Complex and more recently for the endowed Carole Belk Lectureship. She was also appointed as the Stevenson Lecturer at Lees-McRae College in 2011. The Grandfather Highland Games appointed her as Distinguished Author for the 2011 Games and as Author on the Field in 2012.

Houston is listed in Who’s Who in America, Outstanding Women of the Twenty-First Century, Who’s Who in the Southwest, Who’s Who in Education, International Who’s Who of Authors, Something about the Author, Contemporary Authors, and other references. She served on the international Governing Board for Computers Across the World (CPAW), with its stated goal of attaining world peace through communication. Twice each year for twenty years, she participates in the international Authors' Week online through CPAW and the University of Sydney, Australia, serving as Electronic Author in Residence.

As an author of critically acclaimed novels and picture books for young readers, her books have won and been listed on more than forty awards and awards lists, with one international award. The Year of the Perfect Christmas Tree (Dial, 1988, Puffin 1996) was on the annual Publisher’s Weekly Best Seller List and was selected as “most likely to become a classic. Twenty-five years in hardcover, it was named as a “Best Book of the Decade” by the American Library Association, as well as other honors. Published in Japanese, Korean, Swedish, and in English by Fitzhenry and distributed in English by Penguin International and Fitzhenry & Whitesides throughout the UK, the book enjoys a worldwide audience. Adapted as a musical, an opera, and a ballet, productions are presented throughout the United States annually. Two adaptations as screen plays, one of which won the Spoleto Film Script prize, exist, with one currently in circulation.

My Great Aunt Arizona (Harper, 1992, HarperTrophy, 1994) was selected as a Smithsonian Treasure, the Family Channel’s Best Books List, the IRA Teachers and Children’s Choices lists, the NCTE Best Books List and others. It has sold in hardcover for twenty-four years. The ballet premiered in 2008. A sculpture in the courtyard of the Belk Library at Appalachian State University portrays a child reading the book, appropriate in that both Arizona Houston Hughes and the author were graduates of ASU.

Mountain Valor (Philomel 1997, Paperstar, 2000) was selected as Publisher’s Weekly’s choice for the Newbery Medal, which it did not win. It is currently being adapted as a musical. Bright Freedom’s Song: A Story of the Underground Railroad (Harcourt, 2000), in hardcover for twelve years was named as a Bank Street School’s Best Book. Both Mountain Valor and Bright Freedom’s Song won the North Carolina History Association/ American Association of University Women’s Young Readers Award.

The Littlejim books have won numerous awards. Littlejim’s Dreams (Harcourt, 1998) won the Silver medal from School Librarians International. One of the novels, Littlejim, the children's selection as the focus novel for the 2008 regional BIG READ project, the Macon County Read2Me project, and soon to be implemented in Avery County, NC and Rock Hill, SC. Re-released in 2008 by Bright Mountain Books, and in 2012 by Coire Breagh, it has been given new life by demands in social studies classrooms throughout the nation. Adapted as a musical by Jason Rhyne, 2008 winner of the Jonathan Larson Award and the Richard Rogers Award for playwriting in musical theatre, Littlejim as premiered by the Mesa, Arizona, Performing Arts Center. Negotiations for productions by theatre groups in the region are currently underway.

Miss Dorothy and Her Bookmobile, distributed internationally by HarperCollins, NYC, was illustrated by Susan Condi Lamb, who also illustrated My Great-Aunt Arizona. It won the American Association of University Women’s North Carolina Juvenile Literature Award and was selected as the Independent Bookseller’s "Inspired Recommendations for Kids."

My Great-Aunt Arizona and Miss Dorothy and Her Bookmobile were selected by Perma-Bound Corporation for their 2012 classroom authors calendar, which will hang in 85,000 classrooms nationally and be available on the internet. The calendar will include a full page spread of the scene of the bookmobile’s arrival at Riverside Elementary School and a biography of Houston outlining her plans to work in her home region.

Miss Dorothy and Her Bookmobile won Houston’s third NC AAUW Historical Fiction award in 2011. Recently she was awarded the Lucy Bramlett Patterson Award for the body of her work by the North Carolina Association of Women’s Clubs.

Houston’s books for young readers have the honor of being included and discussed in a majority of university level children’s literature textbooks and are included in textbooks in use throughout the US.

Her first adult novel, The Carolina Barndance , is in circulation, as are several other young adult novels and picture book manuscripts.

Her writing textbook/handbook for teachers’ desks, How Writing Works: Imposing Organizational Structure within the Writing Process (Allyn and Bacon/Longman, 2003) has been a best seller to budding writers as well as to teachers and future teachers.

During more than twenty-five years presenting workshops and lectures at conferences internationally, nationally and regionally as author, writing teacher, literature, creative drama and planning/writing consultant, she has served as author-in-schools, keynote speaker, and as consultant in school systems throughout the nation. She has also been writing and planning consultant to national and international businesses and corporations.

Currently, Houston lives in western North Carolina. Offering her training and experience to school systems, historical associations and other professional organizations will finally allow Houston to bring some of her ideas, successfully implemented throughout the nation and the world, to her home region as she planned to do when she returned here to live.

Accommodations are necessary for appearances because she has physical constraints for Multiple Chemical Sensitivity or Environmental Illness. Guidelines are provided for appearances.

or see: Something about the Author, Vol. 138
Contemporary Authors, Vol. 112